Trending: This governor alarmed professors 22 years ago with his vision for distance learning in 2020 — here’s what he says today

UPDATE: Microsoft posts $35B in revenue, up 15%, sees ‘minimal net impact’ from COVID-19 in quarter

Will problems in the Windows PC and server supply chain drag Microsoft down? Or will the boom in productivity, cloud and collaboration lift the company up?

Microsoft’s earnings report Wednesday afternoon promises to double as a litmus test for its evolution beyond its traditional product lines, as the extraordinary challenges and opportunities of the COVID-19 crisis ripple through the global economy and the company’s business.

The company warned in late February, two months ago, that it would miss its previous quarterly revenue guidance in its “More Personal Computing” division, which includes Windows PC and Surface product lines, due to delays in manufacturing in China due to the COVID-19 outbreak in the country.

Microsoft hasn’t offered additional financial guidance as the pandemic has spread throughout the world. However, it’s less reliant these days on Windows to fuel its business, as shown in this GeekWire chart breaking down the company’s revenue by product line, gleaned from data in its quarterly regulatory filings. 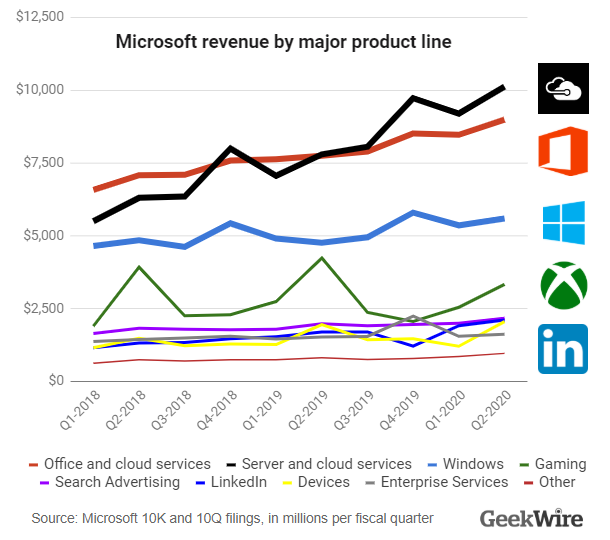 The company’s Office and Windows Server businesses, which have expanded significantly into cloud and subscription services, have risen much faster than Windows to drive an increasingly larger portion of the company’s overall business.

Earlier this month, Microsoft reported a spike in usage of its Microsoft Teams collaboration software, which could translate into growing revenue from its Microsoft 365 subscriptions, the name the company uses for the package of software and services that include its Office applications.

In a memo to employees in March, Microsoft CEO Satya Nadella pointed to examples of Microsoft products being used during the crisis, including?the?Bing COVID-19 tracker, and?the CDC’s Healthcare Bot in addition to Microsoft Teams.

Nadella called software “the most malleable tool ever created” and said it “has a huge role to play across every industry and around the world.”

“Our unique role as a platform and tools provider allows us to connect the dots, bring together an ecosystem of partners, and enable organizations of all sizes to build the digital capability required to address these challenges,” he wrote.

Analysts and investors will be paying close attention to the Microsoft Azure cloud platform, and its larger commercial cloud business, which includes Azure, sales of Office 365 to business users, and its Dynamics business. As a benchmark, the company reported commercial cloud revenue of $12.5 billion in the December quarter, representing more than a third of Microsoft’s overall revenue for the quarter.

Microsoft’s Xbox and gaming businesses also bear watching for a potential rebound, as people confined to their homes look for new forms of entertainment. Microsoft’s gaming revenue was down 15% to $5.87 billion through the first half of its fiscal year, from July to December 2019.

Analysts expect the Redmond, Wash.-based company to post $33.66 billion in revenue for three months ending March 31, its third fiscal quarter, an increase of 10% from a year ago, with earnings of $1.26 per share, up from $1.14 per share a year ago.

Check back Wednesday afternoon for Microsoft’s results as they come in.