Trending: This governor alarmed professors 22 years ago with his vision for distance learning in 2020 — here’s what he says today

Ongoing coverage of the novel coronavirus, and its impact on Seattle and the technology industry. See all special coverage.

COVID-19 knows no borders, and as several US states start to reopen their economies following extended shutdowns, officials in Seattle and Washington state are concerned that the disease could spread further within the country.

“I mean, that’s like having a peeing section in the swimming pool,” said Jeffrey Duchin, health officer for Public Health — Seattle & King County, on a webinar hosted by Life Science Washington. “It doesn’t stay where you started.”

Scientific research and genetic analysis show how the novel coronavirus has spread among different regions of the country. A report last week from Nextstrain, including data and research from the University of Washington and the Fred Hutchinson Cancer Research Center in Seattle, found that each state “profoundly impacts the fate of the others” through the decisions it makes, particularly as people travel. 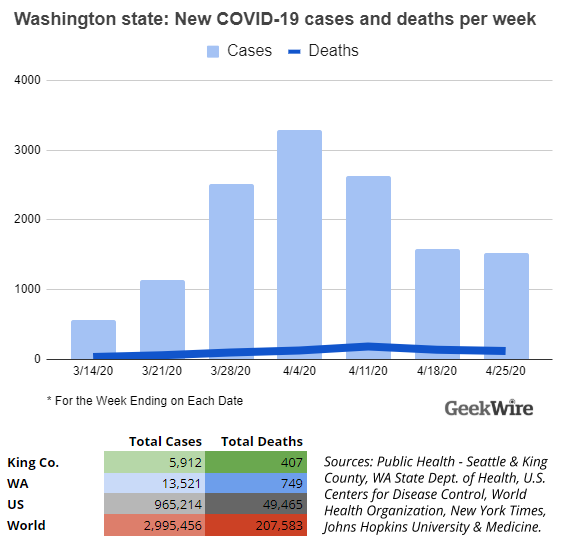 Gov. Jay Inslee has begun to outline what a gradual reopening of the economy in Washington state will look like. He has indicated that elements of the state’s “stay home” order could extend beyond the current May 4 timeline, but there’s been no official word beyond that. Inslee is slated to hold a news conference Monday afternoon.

In the Seattle area, Duchin said, the numbers are “not nearly where we need to be with respect to disease suppression.” Duchin said the continued average of approximately 80 to 100 cases over the past two weeks in Seattle and King County “is way too many.”

Widespread testing and contact tracing are considered key to reopening the economy without causing another spike in the disease. Gov. Inslee has said he wants to see the statewide capacity increase to between 20,000 and 30,000 tests daily, up from around 5,000 a day currently.

Answering questions from biotechnology journalist Luke Timmerman on the webinar, Duchin said he’s concerned about the possibility of a “big bounce with a lot more cases” in the state if restrictions are eased too soon, potentially “two to three times as bad as our initial outbreak if things get out of control.”

He added, “As we start to loosen up those restrictions and people start to go back to work or otherwise leave their homes, we expect to see more people becoming ill. And what we hope is that doesn’t spiral out of control, but the only way we’ll know is if we have adequate testing capacity out there, and widely distributed.”

Meanwhile, Duchin advised extreme caution over the reliability of serology tests designed to determine whether people are carrying the antibodies indicating they have had COVID-19 and may be resistant to further infection. However, an Abbot Labs antibody test being rolled out by the University of Washington is believed to be an exception for its strong reliability.

Watch the full Life Science Washington webinar below with Duchin, biostatistician and infectious disease modeling leader Elizabeth Halloran of the UW and Fred Hutch; and Keith Jerome, head of University of Washington’s Virology Division, who also works at the Fred Hutch.